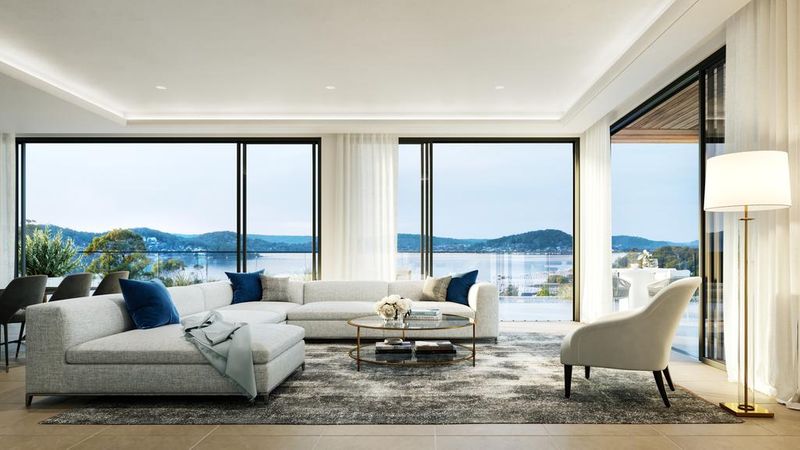 A retired Central Coast businessman has claimed a penthouse apartment in Central Real’s latest development Peninsula at Point Frederick, snapping up the luxury property off-the-plan prior to sales launch for $2.4 million. Central Real, the Central Coast development company owned by BRW rich lister Tony Denny, have started marketing their latest luxury development — a four-storey block that includes three boutique buildings across a large corner block of Albany Street. MORE: Central Coast auction market heating up Historic Macmasters Beach shack to sell for millions Situated on the highest point of Point Frederick with 360-degree views across the Brisbane Water and east to Caroline Bay, McGrath agent Bec Myers said that she had received a huge amount of inquiry in the site.

View from the top selling apartment.

“Because Central Real had the site cleared for some time, I had received lots of calls from buyers asking about what was coming,” she said. “The penthouse buyer, a Green Point downsizer, had been interested in the penthouse for quite awhile. I showed him the architectural plans about 12 months ago — it was just conceptual stuff at that stage but we kept in touch and as soon as we had floorplans he was happy to go ahead and secure the sale.” Ms Myers said that buyers were attracted to the “quintessential Point Frederick” location, luxury finishes and standout outdoor living. “The penthouse has a huge 118sqm of outdoor living space and a triple enclosed garage, which is very unique,” she said. She also noted that the downsizer market was strong on the Central Coast, which has been proven in strong off-the-plan sales from other development sites. For example Elysium, Central Real’s Terrigal development, sold 97% of its high-end apartments in the space of a few weeks back in 2017, with 74 per cent of buyers from the Central Coast. The exciting site with a pool in the middle currently has scaffolding starting to come down on the exteriors and is due for completion early October.

Another Point Frederick site, Ravello, which is owned by millionaire entrepreneur John Singleton, had healthy interest in the first few weeks of marketing, with most inquiry once again coming from locals. “Prior to the last 12-18 months, there were no real downsizer options available on the Central Coast,” Ms Myers said. SIGN UP FOR THE NSW REAL ESTATE NEWSLETTER HERE “People coming from beautiful houses want something substantial — they love the luxury finishes that Central Real have become known for. They don’t just offer a cookie cutter design — the floor plans are customised to cater to a particular market.” The Peninsula project is already under construction and scheduled for completion early 2021. The display suite will be open to the public this Saturday. By Jess Verrender. Source: Central Coast Express Advocate

Refer to contract for sale.
The material contained herein has been produced prior to detailed design and construction, it is indicative only and does not constitute a representation by the Vendor, Agent, or Vendor’s consultant in respect to the size, form, dimensions, specidifications or layout of the apartment at all. The final product may change from that illustrated herein. Furniture is not included. All furniture shown is for illustration purposes only. Changes may be made to the detailed layouts during the development in accordance with the provisions of the contract of sale or the building and or planning requirements or for compliance with relevant standards or codes. Any interested parties should make their own enquiries as to the accuracy of the information.

Central Real and their third-party partners use cookies on their websites. A cookie is a piece of data that a website sends to your browser and which is then stored on your computer or other internet-enabled devices. As you browse through the website, advertising cookies will be placed on your device by Central Real and third-parties so that we can understand what you are interested in. Central Real run targeted advertising, enabling us to present you with advertising on other sites based on your previous interaction with the website. You may be able to use your browser settings to manage cookies. These settings may include deleting all or some cookies, not accepting any cookies, or being notified when cookies are being used.